More than 270 entries were received from all across the USA. Dozens of individuals collected cash prizes.

Each year the contest winners are announced during the conference luncheon.

2. Zippy Kids Award: The Piece/Peace Makers:
Best friends travel back in time to the Revolutionary War to mend the world, demonstrating how a single moment in history changes the world for all time. 1,200 – 3,000 words. Sponsor: Zippy Kids

3. Take a Vacation:
Creative Non-Fiction story about a vacation. Tell us a true story but make it entertaining. 1500 word max. Sponsor: Vernon-Rodgers Tales

First: Shelley Anne Richter for “Rapture in Eureka”
Second: Jane Gatewood for “About an Inch”
Third: Donna Nelson for “You Had to be There”
1 HM: Gary R. Hoffman for “A Memorable Camping Trip”
2 HM: Fay Smalling Guinn for “Girl in the White Bathing Suit”

4. PenPoint Writers Award:
Scary short story, fiction. Between 1500-2000 words. Any genre, any subject. NO sex or violence. Must include the following: an abandoned lake house, inclement weather, and a mysterious light. Sponsor: PenPoint Writers Group.

5. Granny’s Gadgets Award:
Story about keepsakes found in a very old trunk discovered in a country barn, and about the great grandmother they belonged to. 2000 words max. Formatting counts. Sponsor: Peggy Sanders

6. Whodunnit Award:
Short story in which a dead body is discovered at a well-known Arkansas landmark (e.g., Tolec Mounds, Petit Jean Mountain, Crater of Diamonds State Park). Foul play is indicated. Create a sleuth who solves the crime. Make the setting an integral part of your story. 2500 word max. No erotica or profanity. Sponsor: Gary Breezeel

First: Kimberly Vernon for “Murder at Turpentine Creek”
Second: Gary Rodgers for “Cover-Up at the Caverns”
Third: Gary R. Hoffman for “The Judge Would Have Grinned”
HM: Kristin Wood for “Something in the Water”

7. LovePat Press Award:
Personal essay. Subject “How Things Are Different From How You Expected Them to Be.” 1000 words or less. Sponsor: Pat Laster

First: Gary R. Hoffman for “The Big Eight O”
Second: Dorothy Johnson for “How Things are Different From How I Expected Them to Be”
Third: Gary Rodgers for “You’re Not My Real Dad”
1 HM: Fay Smalling Guinn for “Sister Gone”
2 HM: Teresa Reynolds for “I Was Never in Control”
3 HM: Cheri Lynn Quattrochi for “Hospital Homesteader”

First: Debbie Archer for “The Reading Bouquet”
Second: Freeda Baker Nichols for “Pony of Mine”
Third: Debra Wantulok for “I Can Do it Myself”
1 HM: Bonnie Best for “Cletus”
2 HM: Dorothy Johnson for “Jet Finds a Home”
3 HM: Geneva King McDaniel for “The Strange Woes of Bolivar Smoze”

11. Del Garrett’s Gimme the Creeps Award:
Horror story (no slashers) about a midnight adventure in a graveyard. Length: 1000 to 1500 words. Indicate in upper left corner of title page if you want the story published in upcoming anthology. No extra payment, but you will receive a free copy of the book, if accepted. Sponsor: Del Garrett

13. How-to Contest:
Tell us step-by-step how to master any process, from building a rocket, to boiling water, finding inner peace, your choice. 1000 words or less. Sponsor: Steve May

First: Chrissy Willis for “How to Annihilate the Fiends of the Coming Summer Apocalypse”
Second: Donna Nelson for “How to Administer CPR”
Third: Shelley Anne Richter for “Skipping Stones”
HM: Fay Smalling Guinn for “How to Write Badly”

14. Rescue Award:
True story about a dog or cat (or other animal) rescue, especially from a shelter. 1200 words max.Sponsor: Gary Rodgers.

First: Kitty Smith for “The Wall”
Second: Cheri Lynn Quattrochi for “To Wall or Not to Wall”
Third: Gary Rodgers for “Walls for Friends”
HM: Sam Sullivan for “Thoughts on Robert Frost’s Mending Wall”

17. Let’s Play Award:
One act play, 20 – 40 pages. Will NOT be judged on formatting as long as the judge can tell who is talking and what they are doing. Sponsor: Dot Hatfield.

Congratulations to all winners! Special thanks to all contest sponsors and to all the writers who participated in our contests this year. 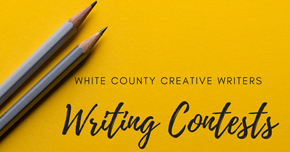 Here are the details for the upcoming 2020 Writers Contests.
Click here to find out more.