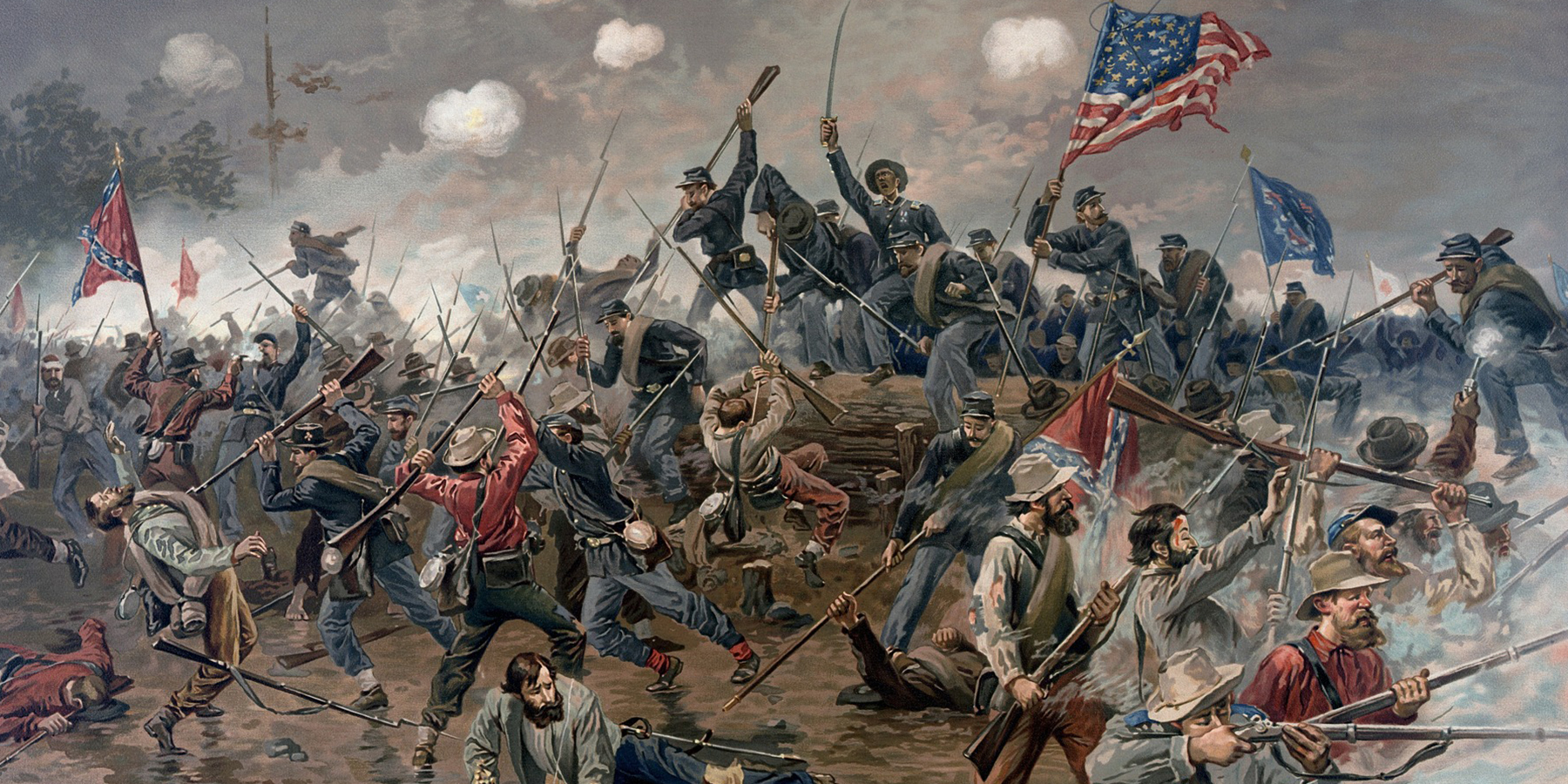 Each month WCCW spotlights one of our members. For August 2022, we feature a short story from Del Garrett.

Del says about this piece…

My first fiction story to ever get accepted for publication. I got my start as a fiction writer when Louis L’Amour Western Magazine published this story in their November 1995 issue.

One of my colleagues, the late Roy Roper of The Penpoint Group, suggested the magazine; I bought a copy, read it, and submitted this story to one of their junior editors.

How lucky I am to sell my first story to such an awesome group as the Louis L’Amour family. I walked around on Cloud 9 for about a week then settled down and got busy with writing other stories.

To learn more about my background, visit my web site:
authorsden.com/delgarrett.

We hope you enjoy Del’s work!

A Matter of Principle

he Yankee captain sat straight and proud in his cavalry saddle. His uniform was immaculately clean. Sunlight bounced off his brass buttons in coruscated plumes. His handsome face was freshly shaven. He had swept the locks of his golden hair back at the temples, over the ears, ending in a stream of curls at the back of his head that barely touched his collar. A neatly waxed mustache, which he twirled between the fingers of his ungloved hand, accented his hawk-beaked nose and square jaw. His other hand, encased in regulation kidskin, held firmly to the reins of a broad-chested, dapple-gray stallion that danced and pranced in the late evening fog.

In striking contrast, the Rebel colonel sat wearily in the Texas saddle on his big roan mare. The horse, too tired to lift its head, ignored the speckled stud and munched gingerly on a clump of wet grass at its feet.

The tattered uniform of the Southern officer had not seen a washing in three weeks. Bunched up around his hulking frame, the heavy coat had lost its luster, much like the cause of battle in the past few days. These were the closing moments of the Civil War, although neither group of soldiers was aware of that in the Georgia swamp that evening.

Colonel Jonas Anderson, a Tennessee horse and mule trader, weighed the importance of what the young officer was saying.

“You have no choice, sir.” The captain spoke matter-of-factly. “To not surrender would be…suicidal.”

Anderson raised his head to look at the captain. The Southerner’s eyes were puffy and bloodshot from lack of sleep. His beard, bright red when the war had started, was now a blend of gray and burnt umber, and was splattered with droplets of red clay from miles of hard riding through the wetlands. When he spoke, it was deliberately slow, forced over and through swollen vocal cords inflamed from a bout with the flu.

“I am,” he said painfully, “a Confederate officer. I cannot surrender.”

“But if you don’t…” The captain was silenced by a wave of the colonel’s broad, leathery hand.

“It is my responsibility, Captain, to lead these men to victory or to their deaths. Look at them. Tired, mostly wounded, some dying. It’s been a stupid war, yet every man here is ready to fight before he surrenders. We are soldiers. We do our duty.”

“But, Colonel…we have more than a hundred infantry, cavalry, and artillerymen. You have less than half that.”

The colonel raised his head and glanced past the young captain. He stared not at the soldiers in blue, freshly rested and eager for battle. Rear-echelon types mostly, still humming the tunes their loved ones sang as they marched off to fight in a war that most of them were still too young to understand. Instead, Anderson looked at the graying sky above the ridge. Night was falling. How many of his men would fall in the oncoming battle? He would probably never see his wife or children again. He touched his breast pocket where a half-finished letter rested against his heart. He had no time to add the final words, “I love you,” to the page.

“What you say is true, Captain. But I cannot surrender. It’s a matter of principle.”

The captain looked at the row of Rebel soldiers resting beneath the trees on the other side of the clearing. Those who stood were bent with fatigue. Not a well-looking man in the lot. There would be no glory in this battle.

The captain rose taller in his saddle and saluted, holding his hand firmly to the brim of his plumed hat. The senior officer summoned his best military dignity and returned the salute.

You’re a fine officer, he thought. You would have made a good Confederate.

The captain snapped his hand down to his side and spurred his mount to the top of the hill where his own commander waited for a report. Anderson held his position and watched the young officer approach the Northern commander. The senior Yankee officer hoisted himself higher in the saddle and looked across the wet expanse of early spring grass that separated the two armies.

“Then we choose to fight, sir?” the captain asked.

“If there were any way we could pass on this, I would welcome it.” The Yankee colonel sighed.

“But we don’t have that luxury, do we, sir? I mean…we’re soldiers.”

The colonel signaled his captain of artillery to ready the cannons and looked to the infantry, which already was fixing bayonets.

From across the way, Colonel Anderson did not miss the order of battle. First, the Yankee artillery would open fire, then the cavalry would charge the line, scattering what was left of his men. The infantry would attack on the run before the ragtag Rebel soldiers could rally.

“Not today,” Anderson swore. He yelled for his men to form a line. “Fix bayonets!”

His words carried across the clearing all the way to the enemy camp. The Yankee commander heard the raspy sound of Anderson’s voice and turned to stare at the legion of half-dead enemy soldiers. He heard the disparaging sound rising from their throats, anguished moans melting into a singularly deafening roar. The eerie ferocity of their war cry chilled the young captain’s spine as he dashed up beside his colonel for guidance.

There, in the misty solitude of a Georgia swamp, the remnants of a once-mighty army, morally unable to surrender, gathered itself into a cluster of grit and bravado under a leader who knew only one way to fight a battle.

“Charge!” Anderson yelled, and the long gray line of screaming, battle-seasoned soldiers surged with surprising speed at the startled enemy.

The Yankee line fell back. Rebel soldiers fought with the conditioned reflexes of a hundred such skirmishes. Hours they fought. Into the night they fought. Into the darkness so black they could no longer distinguish a blue uniform from a gray one, still they fought. After a while they rested, but not for peaceful resuscitation, for the moans of their fallen comrades penetrated the night and grown men shook from fear, from shock, and from the cold dampness of the battleground.

Corpsmen crawled through muddy turf toward helpless, dying men, reaching out, blindly searching for wounds with their bare hands numbed by the cold, stuffing bandages into bloody orifices, doing what they could until morning. Then, with nothing else to do, one by one, the soldiers fell asleep. No sentries were posted, nobody stood watch, no command post provided refuge against the bitterness of battle. Only sleep gave meaning to the day’s events.

When morning came, the Yankee colonel strained his eyes in the early morning fog, looking for his bugler. Reveille called the men to attention. Lines formed. Soldiers in gray stood next to soldiers in blue. Nobody raised a weapon. Nobody lifted a hand to fight.

The young captain, his uniform torn and badly soiled, searched out Colonel Anderson and found him slumped over the body of one of his men. The Rebel soldier’s head was cradled in Anderson’s arms and a Bible rested gently upon the man’s chest.

“Colonel?” The captain stood above Anderson, his voice growing silent, finding no words that were appropriate to the scene of death before him.

Anderson lowered the soldier’s head so it rested on a clump of marsh grass. He didn’t attempt to rise. Reaching inside his pocket, Anderson’s callused fingers withdrew a crumpled, half-finished letter to his wife. He handed it to the young captain who took it and placed it next to his heart, inside his own tunic.

“You’ll see that she gets the letter?” Anderson asked. “The address is on it.”

“And I am in yours, sir. You have taught me much about courage.”

“Then have the courage to withdraw your sword. I do not wish to die with Yankee steel in my body.”

The captain hesitated a moment, then stepped forward and gripped the saber. Sometime in the darkness, just before the final speckling of sunlight extinguished itself, the captain had made a riposte against an enemy soldier he could not see. He had not known it was Anderson who had fallen before him as the final thrust was made.

It took both hands to pull the saber free. Even then he had to brace one boot against the colonel’s massive chest and pull with all his might. Finally, the flesh gave way and the steel blade withdrew. Anderson fell backward on his haunches with one arm bracing himself in a semi-upright position. The captain tossed down his sword and reached for Anderson, cradling him much the same way the colonel had held the dead private.

“I take no glory in this battle,” the captain said.

“Glory is not what makes us men,” Anderson replied. His voice was already growing weaker and his breathing spattered profusely. “The causes we live and die for—our homes and families—that is what is important. You have your cause, Captain, I have mine.”

“Honor lies somewhere between the two.”

Anderson spoke no more. He closed his eyes and died with his right hand clasped around a simple gold wedding band that he wore on a leather thong around his neck. His body was placed alongside those of his men under the out flung branches of a Georgia pine. Disarmed, Rebel soldiers were permitted to wander on their own and parade past their fallen comrades. Each soldier saluted Anderson’s body as he passed it.

During midday, while blue and gray alike ate from the same mess tent, a Yankee rider topped the ridge and sought out the command tent. He handed a scroll of paper to the Yankee colonel, who read the order silently and handed it to the captain of cavalry. The captain also read it in silence, ignoring the swell of tears that blurred his vision toward the end. He said nothing, then dropped the note in the mud and walked away. He walked to where Colonel Anderson’s body rested and stood there solemnly in front of Anderson’s men. He buttoned his tunic and smoothed back his long, golden hair, straightened himself to his fullest height, and gave to the men in gray the orders written in the note the messenger had delivered.

“You men can go home now. War’s over. It ended three days ago.”

“Who won, sir?” From bent knee, a long-necked Tennessee volunteer cocked his head to one side and squinted up at the captain.

There, in the thickness of the Georgia swamp, soldiers on both sides lowered their heads in silent prayer as the Yankee captain saluted the Confederate officer who would not surrender.

You can find out more about Del Garrett on his  WCCW page.