Many years ago I asked a person in my writers’ group to critique something for me. She returned it to me about a week later with several suggestions, and one comment. She said it didn’t sound like me. I agreed that it wasn’t something I normally write, and didn’t think much more about it. Later, as I learned more about writing, the words ‘voice’ and ‘style’ kept popping up. And one day it dawned on me that, apparently, I had a voice, and didn’t realize it.

Voice is the way you present a story to your reader.

As an author, you should work to develop that voice in your writing. After all, you know how you want your story to be heard. It is your own unique way of telling – using your own sensibilities and way of looking at things, and showing that to the reader. You have your own little voice in your own head that’s telling you the story. Do you want your reader to hear it the same way that you do? Identify how it is being told to you.

Create that voice by using specific words, phrases, and other clues that are unique to your personality (or, if you like, the character’s). Choose words that reflect the attitude you wish to convey, or are attributed to certain regions, or chose a sentence style that people associate with your own writing. Use a few dialogue tags and punctuation to lead us. Get personal, or give a speech. Use your words to show us and let us hear the story.

Those voices in your head are real, sort of. And if you let them out, pretty soon your reader will recognize those voices as you. If they like them, they’ll buy more of your books.

You don’t have to tell them where you got them.

Christine Gayle Henderson has been an active member of White County Creative Writers since 1995. Her poetry, essays, and short stories have garnered awards nationwide. 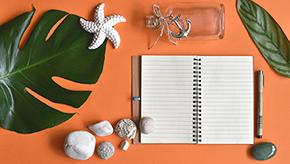 FOR THE LAZY HAZY CRAZY DAYS...
WCCW is sponsoring new writing contests for Summer 2021!
Click here to find out more.

The 25th Annual WCCW Writers Conference is in the books!
Click here to see how it went.