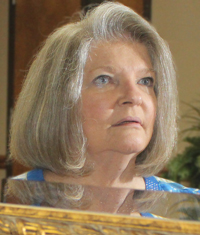 Christine Gayle Henderson has been an active member of White County Creative Writers since 1995. Her poetry, essays, and short stories have garnered awards nationwide, and she has been published in anthologies such as Writing on Walls, and White County Creative Writers’ Park Tales and Who We Are. She has produced newsletters for various corporations and newspaper and magazine articles on subjects such as wildlife gardens, abandoned animals, and library funding. In 1996 she published her poetry chapbook, Having Fun, and Between the Lines, a booklet for beginning writers under the name Gayle Glass. She has spoken to several groups on the joy of poetry, and developed and hosted a workshop for the Arkansas Dept. of Tourism travel writers.

Although she continues to write essays, short stories, and novel beginnings, Chris concentrates more on poetry than anything these days. A new chapbook is due at any time. She can think of no greater pleasure than being in the company of other writers and continuing to learn about the craft.