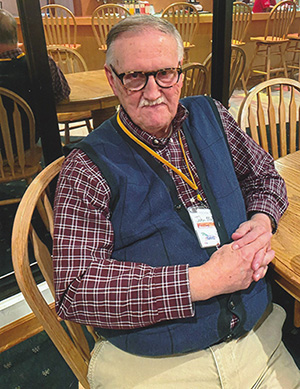 John McPherson was born and grew up in White County. Graduated from Bradford High School in 1957. Married his high-school sweetheart, Hazel Morgan, in 1958. Lived in Little Rock for 42 years, where a son and a daughter were born and raised. John attended UALR part time while working full time for the USPS and completed requirements for a BBA degree in 1974.

After he retired as Manager of Transportation and Networks and Hazel retired as Bookkeeper for the Pulaski County Special School District, they moved to Russellville, AR. After Hazel died in 2012, John moved to Searcy.

After a couple of years in Searcy he began meeting with the White County Creative Writers. A short while later some members formed a chapter of Poets Roundtable of Arkansas called Gin Creek Poets.

He began entering writing contests in his mid seventies. Awards have been satisfactory. He has had poems published in Avocet, a nature poetry quarterly, as well as the weekly on-line version, in Cantos, a publication of Missouri Baptist College, WCCW and PRA anthologies.

His short stories have appeared in Volumes I, II, and III of Del Garret’s Vault of Terror series. He is presently serving as president of Gin Creek Poets and WCCW.